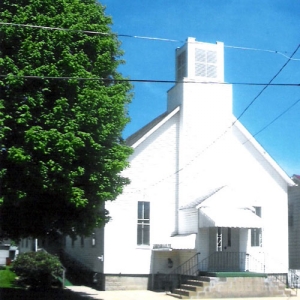 The church was originally in Swede Hollow beyond where the old two school buildings stood. This church had handmade slate type benches, without backs. It was small and seated about 60 to 75 people. The church was known as the Albright Church.

It was destroyed by fire about the first century. The Albright congregation built the present church. The date on the corner-stone is 1891. Bishop Feicht was the head of the church.

It was lighted with oil lamps and heated with a potbelly coal stoves. The lights were changed to gas – the open flame type. Still later mantle type chandeliers were installed.

Some interesting dates are: 1938—the vestibule and street entrance steps were built; 1949—electrical supplies and materials were purchased for church basement; 1952—running water was piped into Church basement; and 1954—the Sallman Head of Christ picture was donated by Rev. Arnold Willis, as the tithe of his love offering when he served as the evangelist for the year.

1960-1961, the side entrance with hall leading to four Sunday School classrooms were built along with the outside and inside stairway to basement.