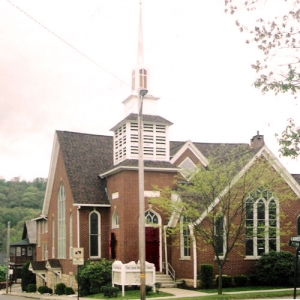 Methodism in New Bethlehem dates back to 1838 when services were held in the log house of Phillip Hoffman, the location of which is now 341 Broad Street. Smith’s Schoolhouse, about one-half mile out of town, was also used for services until 1848, when a school was built in New Bethlehem and the religious services transferred to it.

The First United Methodist Church was built in New Bethlehem in 1853 and dedicated in February 19, 1854. This church, which was a plain, wooded structure and which served the needs of the congregation for 42 years, stood on the location of the paved parking lot in back of the present church.

Our first ministers were the Rev. George Reeser and the Rev. Ahab Keller who were itinerant ministers out of the Curllsville Charge in 1849. Our church became a station appointment in 1901, except during the years of 1954-1965, when Leasure Run Church was also served by the New Bethlehem pastors.

The church was the place of Worship for the Methodists until 1896, when our present church was completed and dedicated April 19, 1896. An addition to the church was constructed in 1927.

In recent years several changes have been added to the church.

In 1993, the Cross and Flame was added to the Lafayette Street side of the church. The steeple was also added that year.

In 1996, the church celebrated its 100th anniversary. A cabinet was built in the narthex of the church for a membership chain. Each chain link represents a member of the church.

In 1998, the double bulletin board on the side front yard was built and the windows on the outside of the church were covered with new protective glass.

The 65+-year-old organ was renovated over a period of 3 years and completed in 2004. In 2005, a new roof was put on the entire church. The beautiful stain glass restoration project, which was to repair the lead in the windows, was finished in 2007.

In 2009, a project to replaster and paint the sanctuary and narthexes has begun.