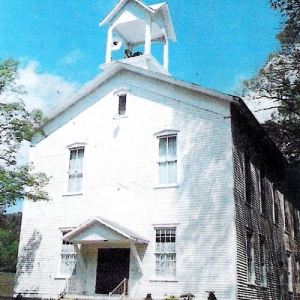 The history of the church in Putneyville stretches back past 1870, when this present church building was planned.  In 1835, a small class began meeting in an old schoolhouse near the Smullin homestead. Later, William Smullin, the first class leader, invited them to meet in his new house (a large Log cabin).The class then built a church near “the Smullin Grave yard.”  In 1844, the class was moved to the Associate Reformed or U.P. Church, now the abandoned school building, in order to be closer to a majority of members.During the Civil War, records of the Sabbath School indicate that it sometimes closed and sometimes found attendance quite poor because of the number of members and teachers who had gone to fight the wa